On May 8, 1945, Germany surrendered to the Allied forces, ending the war in Europe. Celebrations broke out throughout Europe. President Truman called it a "solemn but glorious hour," with half-million people celebrating in Times Square in New York City, but the nation quickly focused on winning the war in Asia.1

There were no official celebrations nor large public displays reported in Texas City. stayed open all day and held special Sunday services to commemorate VE Day, but businesses and plants stayed open. The Texas City Sunday hypothesized that the celebration was so muted because there was still the Asian war left to fight and work to be done to fight it.2

The war against Japan ended in September 1945. The bombings of Hiroshima and Nagasaki on August 6 and August 9, 1945 made it clear to Japan that a ground invasion was not necessary for the Allied forces to win the war. On August 14, Emperor Hirohito announced the surrender of Japan.

Luke Alvey-Henderson (interviewer): When we dropped the atomic bomb on Hiroshima, did you remember hearing about that and what the reaction was?

John Wood: I was amazed. And then the second one, there was Nagasaki. I went to Nagasaki, by the way, while I was in the Navy. We were over there in Japan. the communications officer and the supply officer and I decided to go over there to Nagasaki and see what it was like. Of course it had been built up since then. They just had a little wooden monument at the center of the place. But it was interesting in Japan how hilly and mountainous it was, and going on a bus ride through these little towns was quite a-and seeing the rice paddies and the little hills. We would have been in hard straits had we tried to have invaded Japan. They had mountainous tunnels throughout the land and we would have lost millions of soldiers had we invaded. 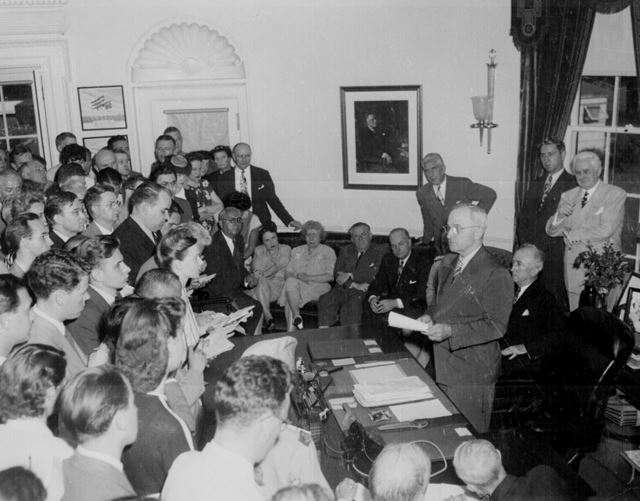 Impromptu celebrations were reported nationwide, with people filling the streets, singing, dancing, and kissing. This time Texas City joined in the festivities. The streets were filled with people and cars blowing horns, sirens, and whistles. Paper was torn into confetti and strewn through the main streets. Many stores closed both the 15th and the 16th. There were also reports of an "impromptu street dance" of service men and their families in the Snug Harbor residential area. There were quiet celebrations as well, as local held special VJ Day services to comfort families, honor the dead, and give thanks for the end of war.3

In the final days of World War II, the United States Armed Forces developed a demobilization plan which discharged soldiers on the basis of a point system based on length of service, time spent overseas, wounds sustained, and number of children at home. From V-J Day in 1945 to 1947, the military decreased from a force of about 4 million to 900,000.4

This led to another housing rush in the wake of the war's end. Defense plant workers and returning servicemen, both flush with their savings, drove housing prices up considerably in Texas City.

The billions of federal dollars invested in wartime industry and technology contributed to the tripling of Texas' economy between 1939 and 1943.5 Nationally, personal income jumped from $96 billion to $171 billion during the war, and the weekly wages of the average factory worker rose from $25.25 to $47.08.6

The local economy of Texas City mirrored that boom. Income from new employees in refineries and plants encouraged the growth of new support businesses. Texas City's population tripled. This led to a booming economy boom that affected housing, retail, medical industries, offices, and schools. The rapid increase in population meant large increases in tax revenues and resulted in many new building projects. Churches, schools, social organizations and even governmental services struggled to keep up with the rapid influx of new residents and their needs.7

At that time we had a lot of ships coming in. A lot of ships. And these people would get off the ships; they would walk all the way from the docks down there down through 6th Street all the way to my dad's drugstore. We had a lot of sailors come in and buy things and get things to drink and so forth. So we had all kinds of stores on 6th Street. We had barber shops, cafes, grocery stores. And believe it or not, Texas City with 5,000 people had five drugstores. Now that's a lot of drugstores for 5,000 people.

By 1950, the population nearly tripled, even after the deaths from the 1947 disaster.

Though many small towns across the country suffered during the war years, Texas City survived and even thrived because of the presence of its defense plants. By 1950, the population nearly tripled, even after the deaths from the 1947 disaster.

Though the plants may have changed ownership, many of those plants are still in operation today, and the industries cultivated by the DPC during WWII still form the backbone of the local economy of Texas City.