The SS Grandcamp was originally christened the SS Benjamin R. Curtis in Los Angeles in 1942. It served with the Pacific fleets during World War 2. After the war was over, the U.S. government offered the ship to France to aid in the restoration of Europe. A French line renamed it SS Grandcamp after the beach at Normandy, Grandcamp-Les-Bains. 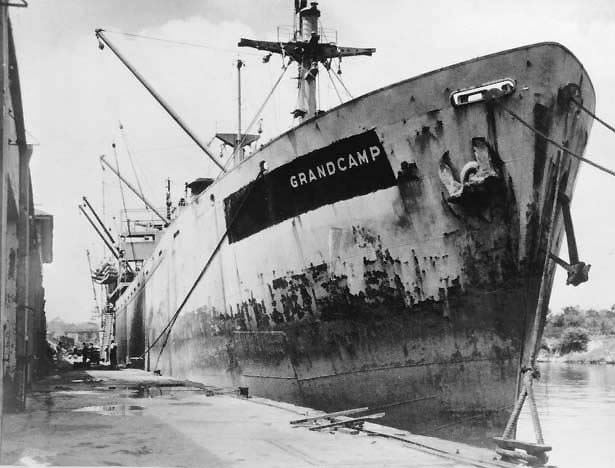 The day of the Texas City Disaster began as an ordinary day on April 16, 1947. The weather was unseasonably cool at 56 degrees, and there was a 20 mph wind from the North Northwest.6 The cargo ship SS. Grandcamp had docked in Texas City five days earlier.

Before arriving in Texas City, the Grandcamp made several stops, including one in Belgium where sixteen cases of small arms ammunition were loaded onto the ship. After crossing the Atlantic, it docked in Cuba and Houston to exchange several freights of commonplace items like twine and peanuts before anchoring in the Port of Texas City at the North Slip of Pier O. The Grandcamp had docked in Texas City to pick up a load of ammonium nitrate fertilizer.

Ironically, the chemical that would ultimately cause the explosion of the SS. Grandcamp was not manufactured in Texas City. The fertilizer compound aboard the SS. Grandcamp had originally been manufactured in War Department ordinance plants in Iowa and Nebraska. It was packed into 100-pound bags, mixed with rosin to prevent caking, and shipped by rail to Texas City. Warm temperatures along the way may have increased the reactivity of the substance; several longshoremen remembered the bags being warm to the touch upon their arrival in Texas City.

During World War 2, ammonium nitrate was used to make TNT, but after the war it was often diluted and used as a fertilizer for crops. In its purest form, ammonium nitrate is not flammable, but it must be kept at cool temperatures. It becomes dangerous if combined with an explosive agent such as a blasting cap or volatile substances like sulfur, sugar, zinc, and copper.

At the time of the Texas City disaster, few federal or bureaucratic regulations regarding ammonium nitrate were enforced. Many modern safety practices were not yet in existence in the chemical industry, and little thought had been invested in planning how to manage a large-scale chemical disaster. In a detailed report following the disaster, a vice-president of the Texas City Railway Co. testified that he considered ammonium nitrate to be relatively safe compound - even comparing it to handling cement - and hadn't considered any precautions for transferring the cargo.