The fire on the SS. Grandcamp produced a dense, brilliantly colored smoke that could be seen all over town. Fires around the docks were a fairly common occurrence in Texas City; it was not unusual for residents to travel down to the docks to watch the fires and the firemen working, which may explain why there were so many bystanders present, and subsequently so many casualties, at explosion of the SS. Grandcamp.

The ammonium nitrate onboard the Grandcamp detonated at 9:12 am, rupturing the ship and sending the cargo of peanuts, tobacco, twine, bunker oil and the remaining bags of ammonium nitrate 2,000 to 3,000 feet into the air. Fireballs streaked across the sky and could be seen for miles across Galveston Bay as molten ship fragments erupted out of the pier. The blast caused a fifteen-foot tidal wave that crashed onto the dock and flooded the surrounding area. Windows were shattered in Houston, 40 miles to the north, and people in Louisiana felt the shock 250 miles away. Most of the buildings closest to the blast were flattened, and there were many more that had doors and roofs blown off. The Monsanto plant, only three hundred feet away, was destroyed by the blast.

Most of the Texas City Terminal Railways' warehouses along the docks were a complete loss. Hundreds of employees, pedestrians and bystanders were killed. At the time of the Grandcamp's explosion, only two additional vessels were docked in port: the SS. High Flyer and the Wilson B. Keene, both American C-2 cargo ships similar to the Grandcamp. 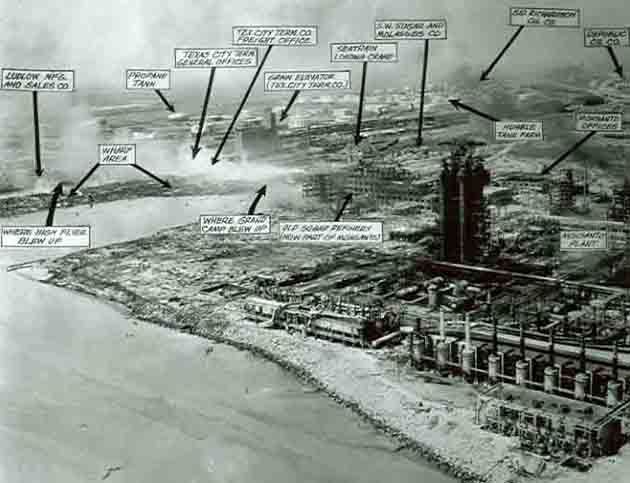 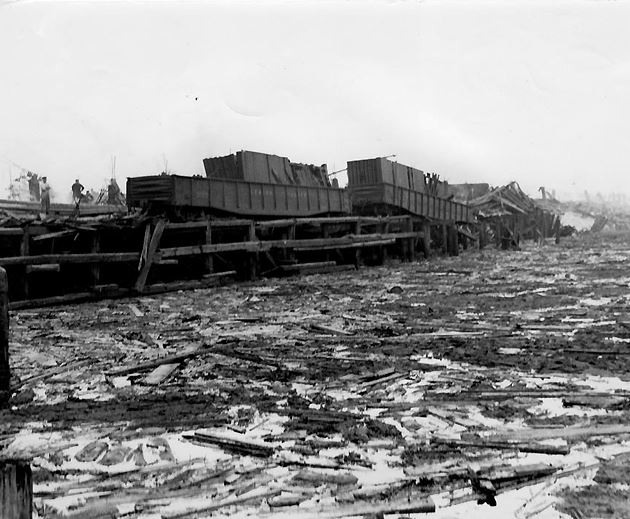 The intensity of the blast sent shrapnel tearing into the surrounding area. Flaming debris ignited giant tanks full of oil and chemicals stored at the refineries, causing a set of secondary fires and smaller explosions. The Longhorn 2, a barge anchored in port, was lifted out of the water by the sheer force of the explosion and landed 100 feet away on the shore. Buildings blazed long after the initial explosion, provoking large-scale emergency relief efforts throughout the day, that night, and into the following day. 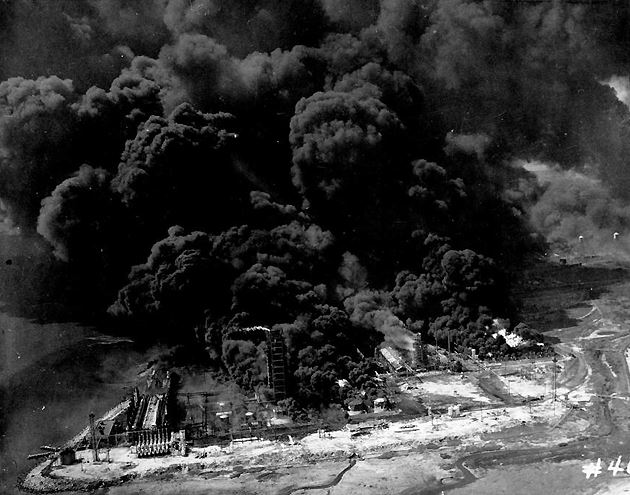 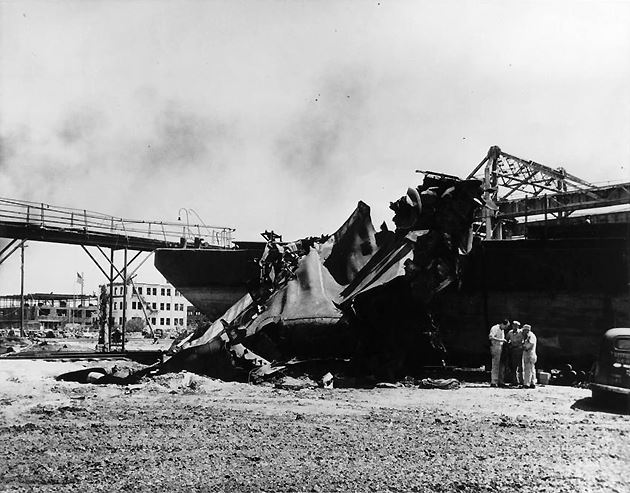 The blast registered on a seismograph as far away as Denver, Colorado. Dockworker Pete Suderman remembers flying thirty feet as the blast carried him and several of the dock's three-inch wooden planks across the pier. Nattie Morrow was in her home with her two children and sister-in-law Sadie. She watched the billowing smoke near the Monsanto plant from her back porch just prior to the blast, Suddenly a thundering boom sounded, and seconds later the door ripped off its facing, skidded across the kitchen floor, and slammed down onto the table where I sat with the baby. The house toppled to one side and sat off its piers at a crazy angle. Broken glass filled the air, and we didn't know what was happening. 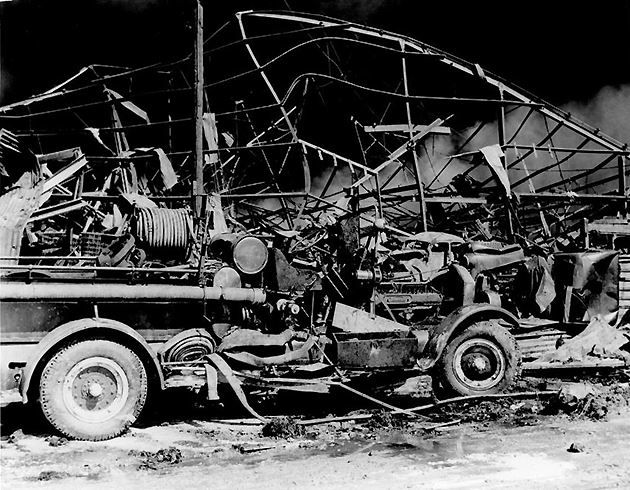 The chief and 27 firefighters from the Texas City Fire Department were killed in the initial blast. At the time of the explosion, phone services in Texas City were not working because of a telephone operators' strike. When the operators learned of the accident, they quickly went back to work, but the strike caused an initial delay in coordinating rescue efforts. 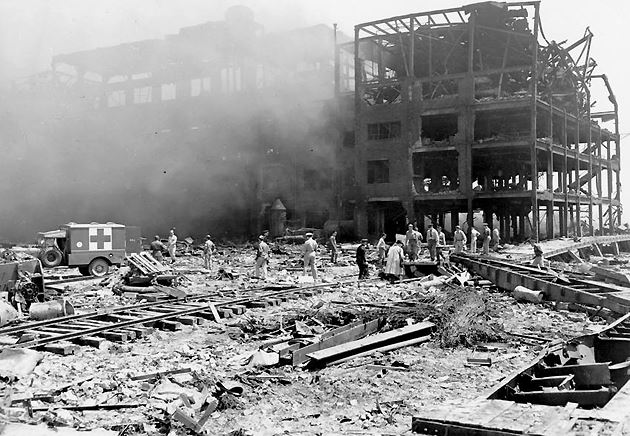 The cities of Galveston, Houston and San Antonio sent policemen to assist the Texas City Police Department in maintaining order after the explosion. The U.S. Army flew in blood plasma, gas masks, food, and other supplies, provided bull-dozers to begin clearing the wreckage, and set up temporary housing for the survivors at Camp Wallace in Hitchcock. The Red Cross, Salvation Army and the Boy and Girl Scouts of America sent a flood of volunteers who provided first aid, food, water and comfort to city residents. Volunteers from other local organizations, and others who were not part of any organization, felt compelled to offer what help they could.

There was no operational hospital in Texas City at the time of the disaster, so volunteers converted city hall and the chamber of commerce buildings into makeshift infirmaries. Many wounded were evacuated to John Sealy Hospital in Galveston, the hospital at Fort Crockett, and hospitals in Houston. 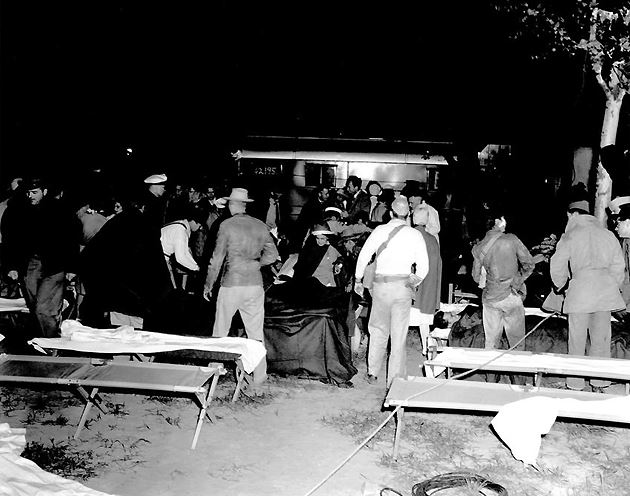 A first-aid and disaster relief station at night. Rescue workers, victims and medical personnel move about the area. Cots are set up in rows. On the far right, a man lying under a blanket is being examined by military personnel. The aid trailer has the numbers 32195 written on a window. Behind the trailer is a large building with some visible window damage.