Even before the war, the refineries and the Texas City Terminal Railway Company (TCTRC) had begun putting new security procedures in place. The attack on Pearl Harbor in December 1941 compelled them to lock down their facilities even further as production of essential wartime materials made the town a potential candidate for sabotage.

Five days after Pearl Harbor, an Army battalion of 750 soldiers, the 135th Infantry, arrived to guard the waterfront, the port industrial area and the Galveston causeway.1

The refineries acquired additional security equipment and trained guards, who patrolled around the clock. Workers had to wear badges at all times and visitors were never left alone. Texas City Terminal Railway Company installed alarm systems in buildings and fencing around its docks, and added a security gate and guard house. 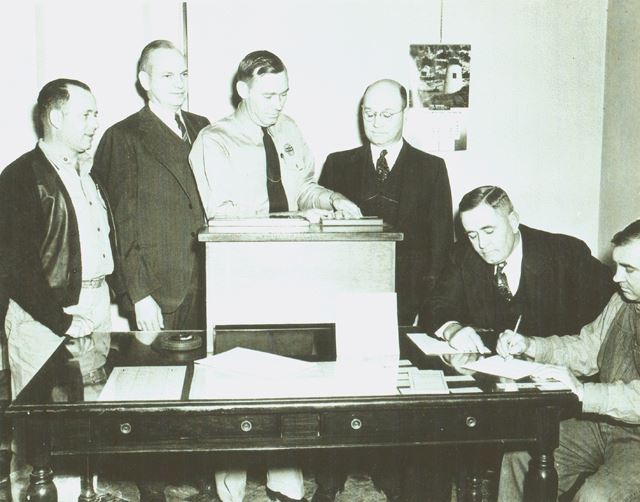 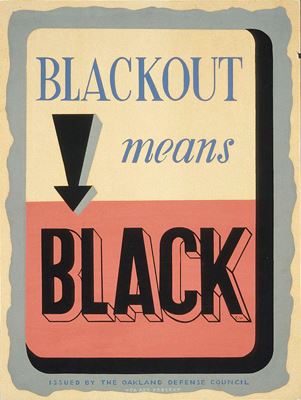 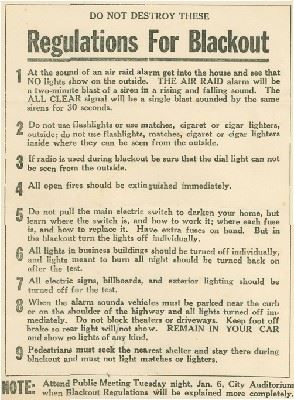 Blackouts were directed to make it difficult for Axis bombers to target the defense plants and other vital parts of the community.

Duane Barger discusses his contributions to the war effort as a high school student:

Rebecca Snow (RS) (interviewer): So what did they use high school boys for? I know they taught like first aid, and they had blackouts, of course.

Duane Barger (DB): You went around and-

RS: What did you do?

DB: Went around to houses and knocked on doors, and asked them to do this or to do that, reminded them that they shouldn't be running their lights at night.

RS: So you went around checking to see if there was light?

DB: Yes. If they were near the coast, and their lights was on, well they didn't want that.

DB: So that type of stuff. And then, not necessarily sitting in a place to watch for planes-

RS: They had those, but we haven't been able to find anyone who did it.

DS: Yes. I wasn't really sitting in a place to watch for planes, but we studied planes to see what kind of planes was coming over, what type.

Luke Alvey-Henderson (interviewer): So another thing that was common around the time, especially in Texas City, was blackouts. Do you remember those well?

Clarence Wood: Oh yes, I remember them very well. All the people had to have dark shades for their windows and have very few lights inside the windows. And on the cars, they wouldn't allow them to turn on the headlights.

Out in the Gulf of Mexico they might send bombs over from the Gulf. I do remember that during the war there were a lot of German submarines in the Gulf of Mexico, and every once in a while we'd find a body float up on the seashore from the Germans torpedoing the boats that went out from Houston and Galveston.

Ships and sailors in port for industry-related operations faced new restrictions from the government and heightened scrutiny from the Coast Guard. Everyone who worked at the docks had to be able to show identification and a license to work there. All ships had to acquire permission from the Coast Guard to enter and leave the port.2

Prior to the war, more than 90% of the town's oil-related traffic moved by water in tankers and barges. During the war years, much of the transport of goods shifted to land due to wartime restrictions and danger in shipping lanes.3

During the early years of the war, ships traveling alone off the Florida, Atlantic and Gulf coasts were at risk from German U-boats. Although the presence of German U-boats in the Gulf was kept secret from American civilians, shipping patterns and procedures were greatly affected. At first, Navy commanders were unwilling to assign Navy ships for convoy protection due to war needs in the Atlantic and Pacific theaters. Instead they sent destroyers and Coast Guard vessels to hunt U-boats in heavily-traveled sea lanes. This proved ineffective and U-boats continued to sink a large number of cargo vessels. Finally, in April of 1942 Admiral Adolphus "Dolly" Andrews, commander of the Eastern Sea Frontier of the United States, took over command and began phasing in armed convoys of all shipments. Ships from Houston and Texas City would sail to Galveston, where convoys were formed and escorted.4

While stationed in Corpus Christi, Duane Barger watched for submarines.

Duane Barger: Now they had submarines in the Gulf. And when I was stationed in Corpus Christi, that's one of the things on our training that we were supposed to be looking for: submarines. We flew all over the Gulf, and out in the Atlantic for a little ways. We didn't go far out in the Atlantic. But off of Florida and out there. You was always looking. Because you could see a submarine in like the Gulf, you could see a submarine. Looks like a big fish down there, until you're up high.

Worried About Submarines in the Gulf

Clarence Wood worried about submarines in the Gulf:

Luke Alvey-Henderson (LAH) (interviewer): Did you ever worry that Texas City actually might get hit, as it was a target?

LAH: So how did you go about your day-to-day life having that kind of apprehension? How did you put it out of your head?

CW: Since I was in high school, in the senior class, we just went to school and the ones that are still left at it didn't enlist. And we just did about our daily routine, but very well aware that anytime now we might be invaded.