On December 7, 1941, a total of 353 Japanese fighters, bombers, and torpedo planes attacked the home base of the U.S. Pacific Fleet at Pearl Harbor, Hawaii. One hundred eighty-eight American aircraft were destroyed; 2,402 americans were killed and 1,282 wounded.1 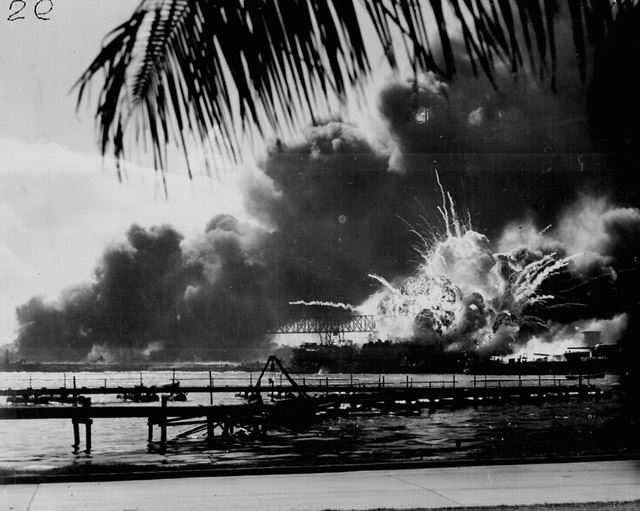 Clarence Wood recounts his reaction to news of Pearl Harbor:

Luke Alvey-Henderson (LAH) (interviewer): So where were you and what were you doing when you heard about Pearl Harbor?

Clarence Wood (CW): I was at the Texas City Sunday paper, folding some papers that were sent out to the oil companies once a week. That was on a Sunday afternoon. And I heard it on the radio.

LAH: And do you remember what your immediate reaction was to hearing that?

CW: Yes, I remember saying, "Oh my goodness, we're in really deep trouble now." Since they explained about the bombing over at Pearl Harbor, and all our ships being sunk, and all our airplanes being destroyed over there. I said, "My, they're going to invade us before long."

LAH: So that had to be something that was a new feeling, to actually feel apprehension that your very nation itself was in peril-

CW: It was very much. Yes it was. I was really kind of scared, I guess you might say.

Mary Ann Reed has never forgotten where she was that day:

Mary Ann Reed: I have a very vivid memory of the day that Pearl Harbor was bombed. We happened to be-it was on a Sunday through we happened to be visiting my aunt and uncle, who had a farm in Hutto, Texas.

And I can remember the whole family gathering around the little radio that was in the living room and the adults were so concerned and upset and worried about this that I immediately discerned that something terrible had happened. I had absolutely no idea where Pearl Harbor was. I thought we'd be bombed [at] any minute. (Laughs.) Later on, the adults took me aside and explained that we really were far away from the fighting but our country was going to be at war.

It's funny, one of the-I was sitting on the floor and I can remember exactly the pattern of the rug where I was sitting because I was sitting there looking at the floor while the adults were discussing this terrible event that had happened to our country. And I'll never forget that; you know, it's very vivid in my memory.