Churches have existed in the Texas City area since the late 19th century. Many religious groups met informally or intermittently for some time before establishing themselves as permanent institutions. Early citizens of Texas City also frequently worshipped in other communities where churches for the denomination or religion of their preference were already established. Some early churches existed for a while and then closed; others are still thriving in the community today. Following is a chronologically-arranged outline of some of the churches that existed in Texas City before 1950:

Originally established in what was known as Highlands (off Highway 3) in 1885. The church was originally known as the Campbellville Missionary Baptist Church. Reverend I.S. Campbell was the first pastor. The name of the church was changed to Bell Zion in the 1950s after a new building was constructed.

A Texas Historical Commission plaque in front of the church indicates that the church began meeting as a small group in 1894 and then formally organized in 1896 under the leadership of Reverend WH. Barkalew. The congregation's first permanent building was erected in 1900 after the hurricane of that year. In 1907 or 1911 (sources differ), the Central Methodist Episcopalian Church South was organized by members of First Methodist Episcopal Church who left after the Methodist Church divided into Northern and Southern factions of the denomination. In 1938, the two churches once again joined to become First Methodist Church. In 1961, the congregation changed its name to the First United Methodist Church. 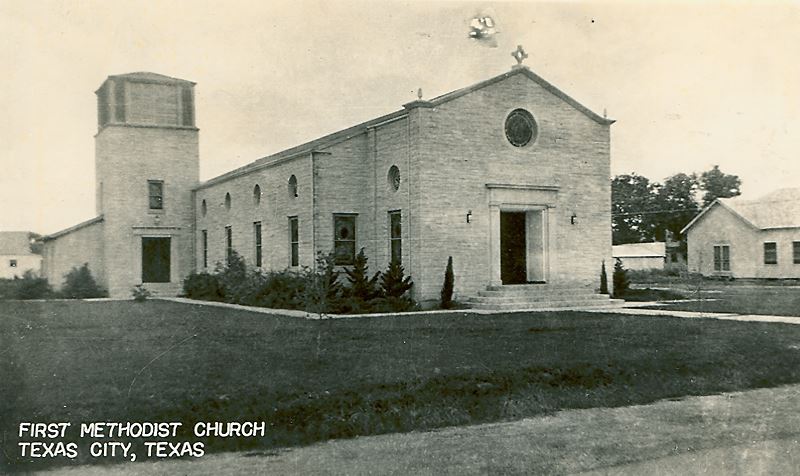 The first Catholic mass held in Texas City was performed by Father Kelly in the home of J.E. Seiber prior to 1900. Father Kelly continued to hold mass in the Seiber home until 1911, when St. Mary's Catholic Church was built. St. Mary's did not have a resident pastor until 1921, when Reverend Michael J. Leahy arrived.

Established March 16, 1905 by Reverend D. L. Griffith of Alvin, Texas, and five charter members. The church's first building was on 4th Avenue N, near the Danforth School. In 1932, the church started a Mexican Mission to serve Spanish speakers, which later grew into its own self-supporting church.

Organized January 1913, with its first services held in a tin building on 6th Street. Sometime before 1917, its first permanent building was constructed.

First service held March 23, 1913. Its first priest was Army Chaplain C. W Freeland. After the Army pulled out of Texas City, visiting priests from Houston or Galveston held services in Texas City. The church purchased its first permanent building in 1915.

Organized in 1923 under the leadership of Reverend A. E Ewell, the congregation of the Central Christian Church met in various venues until it purchased a building on Eighth Avenue. The church disbanded in 1932 and in 1936, the building was sold to the American Legion.

Established in 1924 with six members, the Church of Christ erected a wooden-frame church as a permanent place of worship in 1936. It began employing its first regular minister, Reverend E G. Green, in 1938.

The church was established through a series of revivals, which began January 10, 1932. The church was first called Trinity Tabernacle of Texas City and was led by E L. Mason of Goose Creek. Services were held in members' homes until the congregation purchased the old Trinity Baptist church building sometime in the late 1920s.

Our Lady of the Snows Catholic Church

Established in 1939 to serve the Catholic Hispanic community, Our Lady of the Snows existed through the early 1960s.

Established in 1939 with 100 charter members, most of which came from First Baptist Church of Texas City.

Organized in 1942, then in 1944 a group of members from the Lutheran Church of La Marque transferred membership to this church in order to start a Lutheran Church in Texas City.

Began meeting September 1944 then chartered October 1, 1944 as Texas City Lutheran Church, with Pastor Trogan as its first minister. The congregation decided to change its name to Memorial Lutheran Church in 1947.

Established February 5, 1946 by nine members who met in a private home. Three weeks later, 12 charter members had their first service. The congregation met in the Girl Scout buildings until a permanent facility was built on 17th Avenue North. and 6th Street North.