Founding of the Department of Sports & Recreation

Texas City's Department of Sports and Recreation was started in the fall of 1949 with the goal of provid[ing] a system of supervised recreational activities for all the people in this area with perhaps more emphasis on the children (Burns, 1962). In 1951, Texas City bought 55 acres of land for a municipal park between 5th and 9th Avenues North (Morris, 1975). Two public swimming pools were built in 1951, the Nessler Pool, next to the present-day Lowry Center, and the Sanders Pool, which was built at 311 9th Street S (Burns, 1962).

The city's first baseball stadium was Robinson Stadium, at 2756 13th Avenue, completed in January of 1955 (City of Texas City, 1955). The Carl Nessler Civic Center was dedicated on May 30, 1956. The Nessler Center was part of a 55-acre city complex that included park land, picnic areas, tennis courts and an outdoor pool ("Civic center," 1956).

In 1956, the first Park Commission was formed, with W P. Dooley as its director. From 1956 to 1960, many city parks were named after Texas City mayors. Bremond Park, now located at Texas Avenue and 23rd Street, was an exception. It was donated to the city in 1915 and named after Paul Bremond, a Houston merchant ("Land for park," 1915). At that time, there were 11 parks, with a total acreage of less than 100 acres (Burns, 1962). Texas City Independent School District completed Stingaree Stadium at 1800 9th Avenue N by 1959, part of an expansion that included the present Texas City High School (Texas City High School, 1959).

The Sanders Community Center was built at 801 3rd Avenue S in 1960, although it wasn't named until later. The center was dedicated on April 3, 1960, and was originally meant to serve the city's African American residents (Godard to open, 1960). It included the community center building, a park, and a swimming pool. The center was named to honor Professor George Sanders, who was the first principal of Booker T. Washington School (Evans, 2008).

Franz Kohfeldt, a land developer in Texas City, donated 10 acres located near the intersection of Orchid Avenue and 5th Avenue North to the city in 1961 (Kohfeldt makes, 1961). The city transformed the land into Kohfeldt Riding Arena, where citizens can take their horses out to ride. In 1968, the Kohfeldt family also donated 200 acres west of Highway 146 on the edge of Moses Bayou to the City of Texas City for the purpose of creating a golf course (Kohfeldt family, 1968). The city contracted with golf course architect Joe Finger to design the course. In 1974, the Bayou Golf Course opened and is still operating today.

Texas City citizens voted to pass a $1.6 million Parks and Recreation bond in December 1970. This money allowed for a five-year expansion plan of the department's facilities (Morris, 1975), including the construction of the Bayou Golf Course and Carver Park. Located at 6415 Park Avenue in West Texas City, Carver Park was created on land originally owned by Frank Bell, Jr. and his associates. Bell sold 20 acres and donated five acres to Galveston County in 1948 so that a park serving African Americans in Galveston County could be built (Gallaway, 2006). More than 20 years later, Galveston County gave the land to the City of Texas City. In 1973, the City completed construction on the Carver Center, which included a pavilion with a swimming pool, two lakes, and other facilities ("The new Carver", 1975). The Carver Pool and the Nessler Pool were the two public swimming pools in Texas City, with the Sanders Pool available for special events. 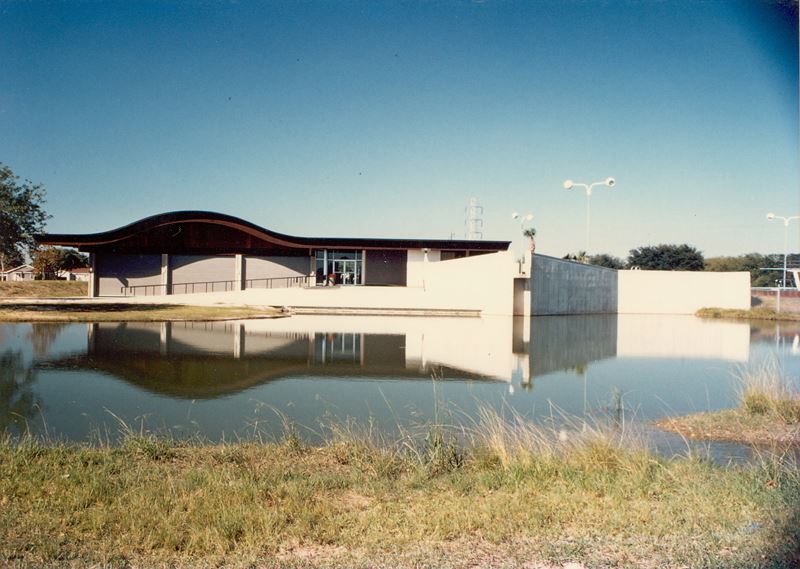 After Carver Park, Texas City built a new recreational center in the City Hall Complex. The Lowry Physical Fitness Center was dedicated October 5, 1974. It had a 75-foot heated pool, courts and exercise rooms (Birth to Lowry, 1974). A jogging path was created outside of the Center, but the present Rotary Fitness Trail was not created until six years later. The existing one-and-a-half mile trail with 18 fitness stations was built with a combination of Rotary Club donations and City funds. It was dedicated on June 2, 1981. The Texas City Municipal Shooting Range opened on January 13, 1974. It is located at 4000 Bay Street and is the only public shooting range in Texas. Built on an old landfill, the range also has a skeet field and is used by area police departments and security forces as well as by local sports enthusiasts. Texas City hosts an annual skeet shooting competition at the shooting range called the Mayor's Cup Charity Skeet Shoot.

The next decade saw more additions and improvements to Texas City's recreational facilities. Texas City Memorial Park and Cemetery, in the 2900 block of Loop 197, was dedicated on September 28, 1991. This park encompasses the two acres of land purchased with donated funds in 1947 to bury the 63 unidentified victims of the Texas City Disaster (Texas Historical Commission, n.d.). On the same day that Memorial Park was dedicated, Anchor Park was rededicated to the citizens of Texas City. This park is located at the foot of the Texas City Dike and is also related to the Texas City Disaster. It holds the anchor from the ship Grandcamp, which exploded in 1947, causing the deaths of hundreds of people. Pan American gave this anchor to the city in 1964, and it was originally displayed outside of the Nessler Center (Anchor presentation, 1964) before being moved to Anchor Park. The Mikeska Sandberg Park, located on Loop 197 South, also commemorates the victims of the Texas City Disaster. That park was dedicated on April 16, 1991 (Gillentine, 1991).

Bay Street Park has been one of the city's most ambitious projects. The 45-acre site adjacent to Bay Street extends from the Texas City Dike entrance north to 25th Avenue (City of Texas City, 2009a). The land was bought in October of 1990 by Dr. Thomas S Mackey on behalf of his firm, Key Metals. Key Metals held the land while Texas City applied for state grants to help develop the park, since the land had to be initially privately owned. After the grants were in place, Key Metals sold a portion of the site to Texas City and eventually donated the rest (Development of, 1994). Phase 1 of the park was dedicated on July 2, 1994 (Dimitri, 1994). It includes soccer fields, a historical pavilion, fitness stations and playgrounds. On February 22, 1998, Phase 2 was completed, which included a lighthouse replica and explorer and birding trails. Phase III, dedicated on September 23, 1999, includes a special playground for handicapped and small children, a playing field, volleyball court, and a children's amphitheater (Pruitt, 1999). Local industry worked with the city government to build the park, with companies donating labor and materials at each phase.

While Bay Street Park was being developed, Noble Park, on 1100 9th Avenue N, was also undergoing changes. This park was originally the designated park for the Snug Harbor housing subdivision that was created in 1943 by the Mainland Company (City of Texas City, 1995). Named for Earl L. Noble, the Texas City mayor from 1926 to 1932, the park acquired a Shay steam locomotive and caboose, on loan from the Galveston Railroad Museum. The museum agreed to loan these in exchange for having another of their steam engines repaired by a Texas City company, Dunn Heat Exchangers. The Texas Kiwanis Club constructed a replica of a train depot on the site, and a fountain was built in Mexico and donated by the League of United Latin American Citizens, or LULAC. All these were dedicated on September 16, 1995 (Simsen, 1995).

In January of 2000, the City of Texas City opened the Charles T. Doyle Convention Center. The center was designed as an add-on to the existing Nessler Center. The convention center was designed by Joseph Hoover, who used a Spanish colonial style of architecture. The central floor of the center can be divided into four rooms, each with a seating capacity of 250 people. In the same year, the City of Texas City and the Texas City Rotary Club funded an upgrade of the existing Rotary Pavilion located in the Nessler Park Complex. Restrooms, lights, a staircase with a new stage and dance area were all dedicated on August 22 (Brinley, 2000a). 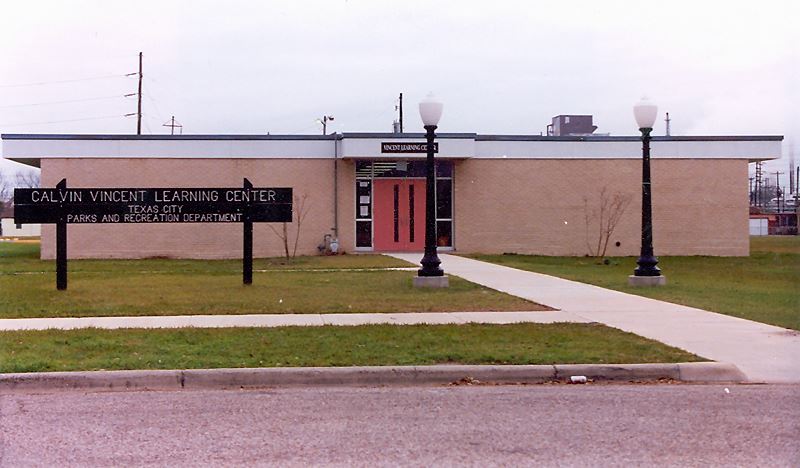 In 2009, both the Carver and Sanders Pools were dismantled, along with the old Sanders Community Center. The City replaced the Carver Pool with a splash park in July 2009. The Sanders-Vincent Community Center, which replaced the original Sanders Center, was dedicated on January 17, 2010. It is located at 501 4th Avenue N The name honors Professor Sanders, the namesake of the original Sanders Center, as well as Calvin Vincent, who was the second principal of the Booker T. Washington School.

On September 24, 2010, the Carlos Garza Sports Complex was dedicated. Located at 3200 Magnolia Street/, the 48-acre complex contains softball, baseball and football fields, soccer practice field and a large covered pavilion. The complex will host the Texas City Music Fest and the Texas City Funfest beginning in 2011.