In 1904, the Texas City Transportation Company was chartered, and it bought all property and franchise rights owned by the Texas City Terminal Company. The Terminal Company continued to operate the endeavor under a lease agreement with the Transportation Company. Railroad track connecting to the port was extended by a little over two miles in 1907, allowing it to reach all the way to the Terminal Junction on the Gulf, Colorado and Santa Fe Railway. This increased traffic to Texas City, making the Port of Texas City accessible to industries from the western United States (Benham, 1993).

Although the railway mainly carried cargo, the terminal did offer a few passenger services in its early years. For a while, an interurban passenger train ran between Texas City and Texas City Junction, with an accompanying ferry service out of the Port that ran between Galveston and Houston. The Terminal also ran a gasoline car called a jitney that carried passengers and mail from Texas City to Galveston (Benham, 1993). At this time, the terminal also provided electricity and water services to the City of Texas City.

In 1920, the Texas City Transportation Company went into receivership and was purchased by Augustus Peabody on behalf of a group of bondholders. Peabody conveyed the holdings of the company to the Texas City Terminal Company, which was subsequently bought in 1926 by three railroad companies: the New Orleans, Texas and Mexico Railway Company, the Missouri-Kansas-Texas Railroad Company, and the Atchison, Topeka and Santa Fe Railway Company (Werner, n.d.). Peabody sold the utilities as well in 1927. Moore remained president of the TCTRC, and under his leadership the company proceeded to build an additional 40 miles of stronger railway track and to improve the facilities at the Port of Texas City (Benham, 1993). 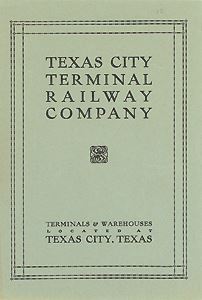 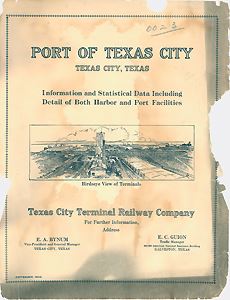 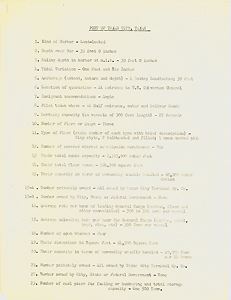 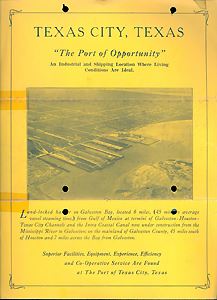 The 1930s ushered in the beginnings of Texas City's petroleum industry, and both the Terminal Railway and the Port of Texas City benefited from the increased shipping needs that this industry brought to the area. Rail traffic through the terminal continued to increase through World War II and the post-war economic boom in the United States.

Then in 1947, two ships filled with ammonium nitrate exploded while they were docked in the Port of Texas City. The terminal and the port were heavily damaged. After learning of the initial fire on the first ship, Henry Mikeska, Hugh Moore's successor as the president of the TCTRC, went out to the docks to supervise the attempts to contain the flames. When the ship exploded, Mikeska was killed, along with many others present on the docks. The TCTRC's second-in-command, Walter Swede Sandberg, took over the direction of the rescue operations during the Texas City Disaster and eventually succeeded Mikeska as president of the TCTRC (Benham, 1993). Despite the extensive damage caused by the disaster, the Texas City Terminal Railway began the process of rebuilding almost immediately afterwards. Within five years, shipping through the port had surpassed pre-disaster levels, and within seven years, rebuilding was complete (Benham, 1993).

In the 1970s the TCTRC started a $4 million project to strengthen their railroad track so that they could use new switch engines at the facility. The program was completed in 1980, and in 1982, the TCTRC bought its own switch engines for the first time. Previously, the terminal had rented engines from other railway companies. In 1985, the TCTRC built an electrical substation on its property and began to provide electricity once again to industrial customers in Texas City.

The Texas City Terminal Railway Company is currently owned in equal shares by the Union Pacific and Burlington Northern Santa Fe Railroads. The company maintains over 32 miles of railroad track and owns and operates three locomotives. The TCTRC transports about 25,000 carloads of product annually, most of which consists of chemicals and dry bulk commodities (Port of Texas City and Texas City Terminal Railway Company, n.d.). The Railway remains an essential part of the Port of Texas City's success as a transportation operation.