The Texas Sugar Refining Company was originally established in 1910, but the construction of the physical plant did not actually take place until 1923 due to lengthy bureaucratic negotiations amongst the financiers and contractors. Port manager Hugh B. Moore was influential in finalizing the decision to build the sugar refinery in Texas City. He argued that the port's close proximity to the proposed refinery would be convenient for shipping and distribution of the product.

Construction of the sugar refinery was completed in February of 1924. Located dockside near the railroad, the $5 million refinery could process over one million pounds of refined sugar daily and was one of only two sugar refineries then operating in the state. The operation refined sugar grown and shipped from various places like the South Texas, Louisiana, Florida and the Caribbean islands. The finished sugar was then shipped out by rail. The refinery employed nearly 400 workers and consisted of nine multi-storied buildings along the waterfront. It had its own dock and distribution warehouse and what was at the time the tallest industrial smoke stack in the state of Texas (Moncla, 1994). 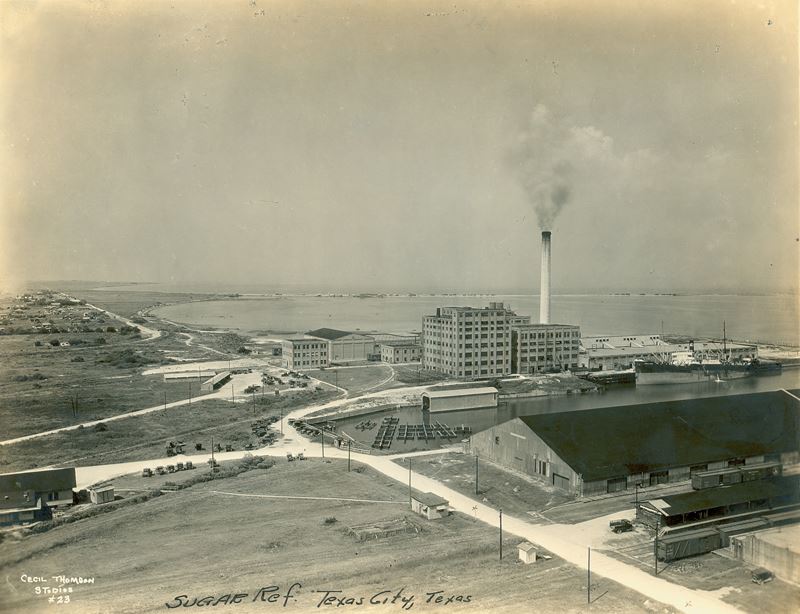 By the mid-1920s the sugar refinery's production was at its peak, and it was Texas City's most profitable industry. However, in 1928 the refinery was forced to file for bankruptcy due to a lawsuit filed by a Chicago title company. The refinery was bought out and reorganized under a new name, Texas Sugar Refining Corporation. It commenced production of another brand of sugar called Diamond Star Sugar. Yet due to increased competition around the region — namely the Imperial Sugar Company in Sugarland — and new government laws establishing set prices for sugar and other commodities, the refinery was forced to close down in 1932. The Monsanto Chemical Plant was ultimately rebuilt at the sugar refinery's location (Moncla, 1994).