For the purpose of accommodating the various visitors, traveling businessmen, port personnel and other "allied trades people" constantly staying in Texas City, the Texas City Improvement Company constructed a three-story hotel at the corner of what is now Texas Avenue and 5th Street, calling it the Southern Hotel (Benham, 1987). It was built with imported cypress wood and contained 70 rooms, a large foyer, formal ballroom, two parlors and accompanying dining facilities. It even had a garden with a fountain on the outside (Southern, 1963). With the hotel's completion in 1894, it became the de facto social center of the small port town.

Orchestras and other musical bands were hired to play for guests who ranged from rich oil barons to longshoremen. Though it was considered lavish for the time period, the hotel was still without baths in the rooms and guests had to use men's and women's lavatories to wash in (Southern, 1963). 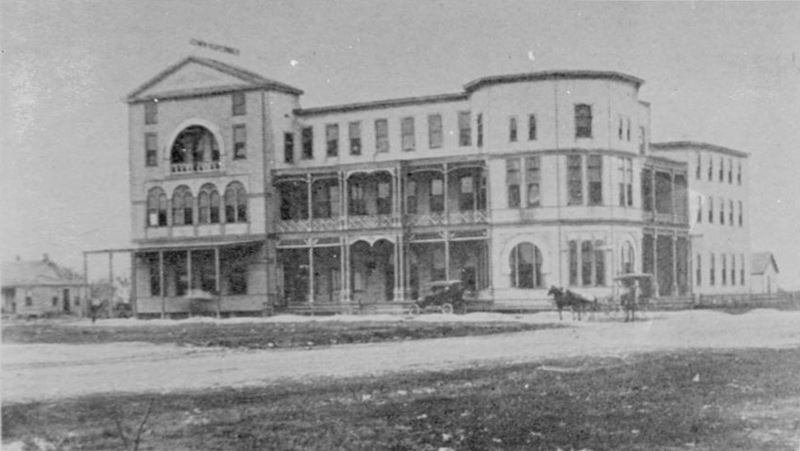 The 1900 Hurricane heavily damaged the Southern Hotel and the building itself had to be relocated from the corner of 5th Street and Texas Avenue to the corner of 3rd Street and Texas Avenue where it was subsequently renovated and newly furnished. In 1911 electricity was installed in Texas City, and the Southern Hotel was the spot where one of the very first electric lights was turned on. It shone brightly at blinking intervals atop the roof of the hotel which was then the town's tallest non-industrial structure (Southern, 1963). Damaged again in the 1915 storm, the hotel was renovated once more and resumed its operation until a third storm in 1943 damaged the Southern Hotel beyond repair. Ultimately it was completely torn down and the site was abandoned. It is still regarded as an important location in Texas City history (Mabry, 1986).