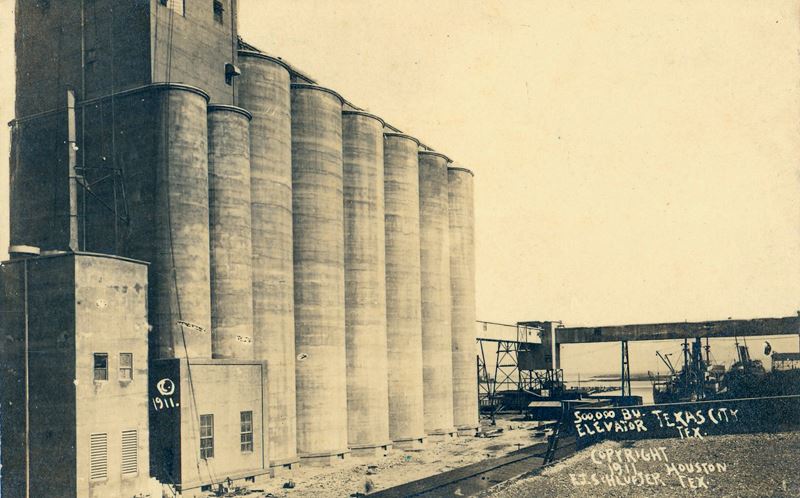 In 1907, the Texas City Terminal Company had just completed an extension project of its rail line when it embarked on a new project to construct a modern grain elevator. Costing nearly half a million dollars, the grain elevator was built to house one million bushels of grain (Oakes, 1908).

The grain elevator was located dockside, just north of the main pier, which allowed easy access by both railroad and cargo shipping vessels. The standard mode of operation was to receive bushels of grain by rail from wheat fields in the north and distribute the partitioned grain onto ships heading abroad.

The grain elevator was essential in establishing Texas City as a major port, especially after the channel was dredged and larger cargo vessels could access the port (Benham, 1987). Though it sustained damage in the 1915 hurricane, damage to other institutions and services in close proximity to the grain elevator proved more detrimental to its operations; production levels stagnated for several years after the hurricane of 1915.

It wasn't until August of 1918, about a year following the United States' entry into World War 1, that the U.S. Grain Corporation authorized heavy transfer of grain through Texas City. The grain elevator housed grain intended for transport overseas to Europe. This revived the grain elevator's operations and helped reinvigorate Texas City's economy (Benham, 1987).

In 1927, with funds partitioned by the Texas City Railway Company, the grain elevator began a renovation project that doubled its production. A conveyer belt was constructed capable of transferring 40,000 bushels an hour onto cargo ships. Additional space was built to house the extra amounts of grain which could now be more swiftly processed. Up until the 1947 disaster, when the grain elevator was damaged beyond repair, it greatly contributed to the industrial prowess of Texas City (Minutaglio, 2003).