In 1940, the Defense Plant Corporation (a subsidiary of the U.S. governmental agency Reconstruction Finance Corporation), announced that it would construct a tin smelter in the United States with the capacity to process 18,000 tons of tin ore per year. Texas City was chosen for this project because of its port facilities and easy access to inexpensive supplies of natural gas and hydrochloric acid (Bennett, 1949). At the time of construction, the Texas City smelter was the only existing tin smelter in North America. World War II had just begun, increasing the U.S. government's urgency to stockpile metals used in the manufacture of munitions and supplies for its armed forces. At its peak, the plant produced about 45 percent of the world's tin (TC, 1968). 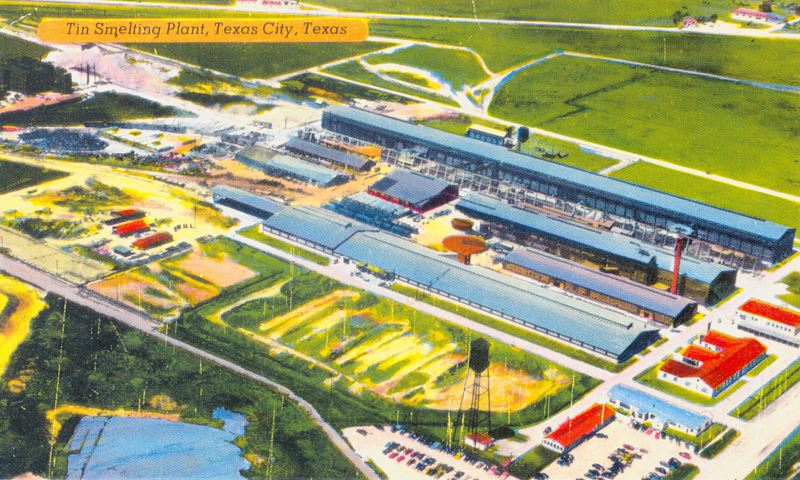 The plant, named the Longhorn Tin Smelter, was constructed for $3.5 million in just 13 months and began operation in 1942 (Bennett, 1949). Because its location was approximately three miles from the docks at the port, the tin smelter came through the Texas City Disaster unharmed (Tin, 1947). In 1950, the plant completed construction on a waste acids unit which enabled it to reuse the hydrochloric acid necessary for processing the tin ore. Previously, the plant had dumped the hydrochloric acid into Galveston Bay or stored it in ponds (Not, 1949). At that time, the plant employed approximately 800 workers (New, 1950).

In 1957, the Wah Chang Smelting and Refining Corporation purchased the tin smelter from the U.S. government (Demands, 1966). In 1967, Wah Chang sold the plant to Fred H. Lenway & Co., Inc., which had headquarters in San Francisco (TC, 1968). By this time the plant's employees numbered about 130. Later the plant was acquired by Gulf Metallurgical Company, which renamed the plant Tex-Tin Corporation. In 1988 or 1989, the facility ceased producing the tin ingots it had manufactured since 1942, but continued operation as a copper smelter until 1991 (U.S. Environmental Protection Agency, NPL, 2010).

In 1979, the Environmental Protection Agency (EPA) did a preliminary assessment on a 170-acre site that included the Tex-Tin plant to determine whether the area contained pollutants that were harmful to humans (U.S. Environmental Protection Agency, Clean, 2010). The site was found to be contaminated with heavy metals and naturally occurring radioactive materials (NORM) and was declared to be a Superfund site (Allen, 2010). The EPA then began working with the responsible parties to institute a remediation plan for the site. (Visit Superfund Information Systems for a list of the steps taken by the EPA during this process.) The Moore Memorial Public Library is the designated repository for documents relating to these actions by the EPA, and documents are available at the library for public viewing. In 2003, the EPA, the Texas Commission on Environmental Quality, and the City of Texas City signed a Superfund Ready for Reuse Determination document, indicating that the remediation on the project had been successfully completed. The EPA continues to conduct annual operation and management and groundwater inspections at the site (U. S. Environmental Protection Agency, Tex Tin Corporation, 2010).